So. Sometimes I get so excited about projects, start a million projects, and have loads of yarn. But this time around, I had to be timely. The project was for a friend's child. I wanted to make a special present for my Denny (my nickname for the kiddo) and with some internet searching, Project Batman Blanket commenced.
Here's the pattern I found on Craftsters: 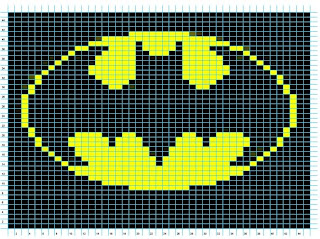 From there, I doubled all the spots above, added in a boarder below and next to (around 33 rows of pure black below and above, while there's an extra 40 stitches on the left and right) started hooking. I wish it really was that easy. 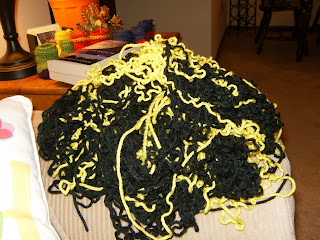 This is was after I finally stopped my hooking and realized that the Batman Symbol was no longer in the center. I had lost count of my 40 stitches on the sides. Therefore, changes had to be made because the symbol had moved at least 10 stitches to the right. 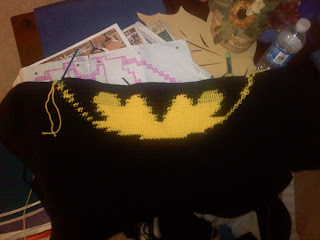 See the yellow string on the left? I have the identical one on the right as well. They were my place-markers to tell me where the 40 stitch edge came so I knew where to start the symbol counts. I also decided not to cut any strings unlike the first attempt. I was threading in strings as I went...making life so much better. That graphing paper under the blanket is the pattern I followed. I took the original and doubled it, graphing it out on paper. And then I counted out each of the rows. Made my life WAY easier than trying to do it on the fly. Definitely the three tips I would try to do if you're attempting The Batman Blanket.
After all summer of hot hands and one redo, I finally was able to wrap the present for my favorite four year old. 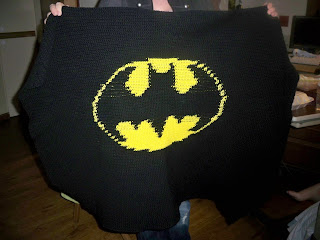 My friend was kind enough to email me the pictures because silly me, I forgot to take a final picture of it before I wrapped it. I heart this blanket so much, I think I want one....maybe not until the holidays are over though ;)
Here are the specs:
Hook: G
I used a G because its the hook I use for everything. The pattern on Craftster uses an I. Choose what you want...the G made for a tight blanket.

Yarn: Black and Yellow Red Heart Yarn. I unfortunately can't tell you how much I used because I ripped out the first blanket. Buy way more Black, that's for sure.
Stitches: All single stitches. The only issue comes when going back and forth between yellow and black. You have to count the actual stitches because the blanket will look different with the tops of the stitches laying over the next stitch. If that makes sense.
Leave a comment if you have questions...I realize that this is not a tutorial but I would love to help with your own blanket if you have questions!
Hook on friends!
-sno
Posted by Sno at 9:07 PM

The Facts are These...

Sno
Wisconsin, United States
One successful project down, many more to go!

View my complete profile
We are the music-makers
And we are the dreamers of dreams,
Wandering by lone sea-breakers,
And sitting by desolate streams;
World-losers and world-forsakers,
On whom the pale moon gleams:
Yet we are the movers and shakers
Of the world for ever, it seems
-Arthur O'Shaughnessy